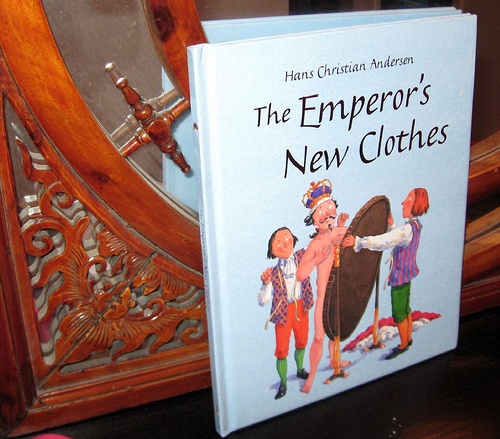 I woke up in a cold sweat last night. I was thinking  about how most of my new divorce clients come in to my office expecting that their judge, even if it turns out to be a new judge, will be a great, experienced, wise judge.

People feel entitled to that.

"The Emperor Has No Clothes!" I realized after all of these years of practicing divorce law.

Huh? It was only a dream (or a nightmare, depending upon your perspective). It compared how judges in Family Court are assigned to cases to how doctors in the hospital might be assigned to patients.

In my dream, there I was, in the hospital, on a gurney, being wheeled down the hallway for open-heart surgery.

The two men transporting me into the operating room, one at each end of the gurney, were having a conversation, as if I wasn't even there.

The one at the front of the gurney said, "This guy, Mr. Kaplan, is going to have his heart surgery performed by our hospital's absolute best PODIATRIST."

"PODIATRIST?!" I screamed. "I am about to have open heart surgery performed by a PODIATRIST, a foot doctor?!"

The hospital in my dream had a director who had decided for some unexplainable reason that all of his doctors in the hospital should be able to handle any type of medical procedure, so they were all generalists.

In my dream, I jumped off the gurney, and ran out of the hospital to my car and sped off. I was not going to allow some podiatrist to operate on my heart.

This is not so when it comes to your family court case in New Jersey. You are assigned to a particular judge and that person will be your judge.  Even if that judge is new and even if that new judge had zero experience in divorce law when he was a lawyer.

In my dream, the hospital it seems, has a system similar to what we have in the New Jersey courts. The New Jersey courts require all judges to be "generalists," meaning that all judges are supposed to have experience in the three divisions of the courthouse: Criminal Court, Civil Court, and Family Court.

Criminal Court judges deal with, well, people who are accused of crimes. They run jury trials.

Civil Court judges deal with noncriminal type litigation, such as auto accidents and other suits between average people.

And Family Court judges deal with divorces, adoptions, child-support matters, child custody matters, restraining orders, and a whole host of other issues that are directly related to families in our society.

More often than not, when a person is first appointed to the court as a judge, they are, for reasons that I still don't understand after 30 years practicing law, assigned to the family court until they become "experienced."

Although these comments will not gain favor with me among my friends on the bench, I truly believe that the amount of damage being done in the Family Court by some (but certainly not all) new judges who have never handled a family court case during their careers as lawyers cannot be understated.

It is simply mind-boggling to observe what happens in some of our state's divorce courtrooms on a regular basis by judges who are inexperienced in family law matters and who are, unfairly to them and to those who they are expected to "help,"  forced to begin their careers in the strange waters to them of Family Court.

Come on, folks. It should not take that much to realize that you cannot take a lawyer with 20 or 30 or 40 years of experience doing say corporate law, appoint that person to the bench, give the person a small amount of training, and expect that person to be able to serve our population properly as a new Family Court judge.

While there certainly are some notable exceptions, the general rule that I have observed for three decades now is that for many new judges, it simply can't be done.

Yet it is being done. Every day, for at least the 32 years that I've been a lawyer in this state.