What It Means To Serve Divorce Papers in NJ 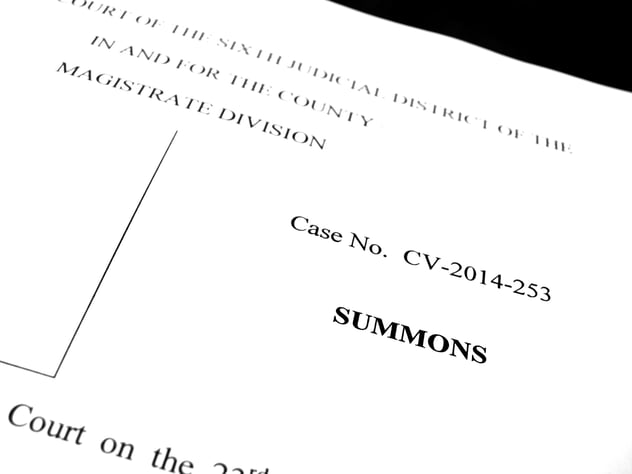 A new client recently hired me and asked me to "serve" divorce papers on his wife that same day.

I explained to him that his request would be very difficult, and probably impossible, to do.

His request made me realize that there is confusion about what it means to serve divorce papers in New Jersey.

Before divorce papers can be "served," they must first be created and then filed with the Court.

Divorce proceedings in NJ begin with your lawyer preparing your divorce complaint.

The complaint states your NJ Grounds for Divorce. It gives the judge the reasons that you are asking for a divorce (most of the time the reasons given are "irreconciliable differences," but not always.)

Once the divorce complaint has been prepared by your lawyer, it is sent to the county courthouse to be filed (that is, received by a courthouse employee and stamped with the word "filed," and assigned a case number known as a docket number.)

By having a docket number assigned to it, there is now a place to file your papers at the county courthouse. It's kind of like having a locker at the local beach club... you know, a place to store your stuff... well, maybe not exactly the same, but you get the idea.

The divorce complaint, now bearing that all important court-assigned case number, (i.e. the docket number) is then returned to your lawyer so that he can arrange for proper "service" upon your spouse, who is now known as the defendant.

Service upon a defendant means that these papers have to be formally given to the defendant. This is so that there is proof that the defendant has actual formal knowledge that she is being sued for divorce by her spouse.

Why is this so important?

To avoid sewer service, that's why.

What is "sewer service?"

Here's how it was described to me in 1980 by my law school Civil Procedure professor, Professor Joel Gora.

About 100 years ago, Professor Gora said, a large business had to sue 100 customers for nonpayment of their bills.

The business hired a lawyer.

The lawyer prepared and filed with the court 100 separate complaints seeking money damages against the 100 different customers who owed the business money.

The complaints were sent to the court and received a docket number after they were filed.

The 100 complaints were then returned to the lawyer.

The lawyer hired someone to serve these papers personally upon the defendants.

The process server came up to the lawyer's office with a large brief case, received the 100 complaints, and went downstairs.

The process server then went over to the sewer in the street and dumped the 100 complaints in the sewer!

The process server then went back to his office, filled out 100 different affidavits of service swearing that he had served the various defendants, and returned those affidavits, filled with lies,  to the lawyer.

Thus, the unknowing lawyer received 100 judgments against 100 different customers and started taking assets of these people away to satisfy these judgments in favor of his client., even though none of the defendants had been properly "served" with the court papers.

Since that time, the Courts have realized how critical it is to justice that someone suing someone else properly "serve" the lawsuit upon the defendant so that the defendant has a fair chance to respond to protect himself.

But how exactly is it done? That is what a new client recently asked me. "Can I do it myself?"

The answer is almost always an unwavering "yes."

This is because the defendant's lawyer understands that she can save her client emotional agony by accepting the papers on the client's behalf.

The process server may stake out the house where your spouse lives or follow your spouse to a food store, pharmacy, work, or wherever.

The process server would then fill out paperwork describing your spouse's physical appearances, your spouse's approximate age, and would forward these papers back to your lawyer.

Your attorney would then forward this document, called an affidavit of service, to the court as proof that your spouse has been served.

The third way that your spouse may be served with the summons and complaint for divorce would be by agreement between you and your spouse.

You might say to your spouse, "Listen, I have hired a lawyer and we have filed for divorce. We want to keep things as amicable as possible. With that goal in mind, my lawyer would like to send these papers directly to you, but my lawyer has to have proof that you received them. Otherwise we cannot go forward in court. Will you sign a statement indicating that you received the summons and complaint for divorce once my lawyer sends them to you, so that I don't have to have a process server track you down and serve you personally?"

If your spouse agrees to this procedure, then your divorce lawyer will forward the papers directly to your spouse along with an acknowledgment page for your spouse to sign indicating that she has received the papers.

These are the three most common ways that your spouse can be served with a summons and complaint for divorce in New Jersey.

All three methods end up with the same result: your lawyer ultimately receives an affidavit from either the other attorney or your spouse or the process server indicating that your spouse has been properly served with a summons and complaint for divorce.

It is important because your spouse has exactly 35 days after being served with the divorce complaint to file a response.

What happens on the 36th day?

On the 36th day, if we choose to be aggressive, we can ask that the court enter default against your spouse.

This would have the effect of the court essentially closing the courthouse door to your spouse for the most part and allowing us to proceed with your case without your spouse's participation.

Options regarding grounds for your divorce in NJ