How Divorce in New Jersey is Like the Old "Cheeseburger! French Fries! Coke!" Skit from Saturday Night Live 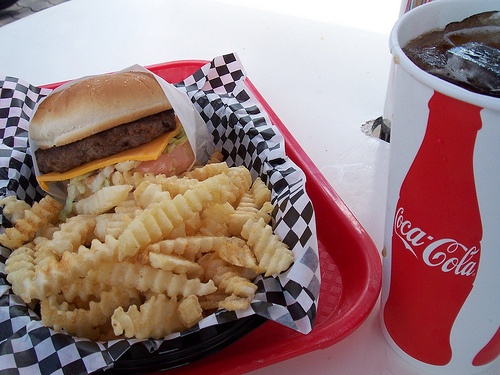 At the end of the day, after all has been said and done, the way that "equitable distribution" of marital property actually ends up happening in the real world in most divorce cases in New Jersey is like a scene right out of a 1970s episode of "Saturday Night Live."

John Belushi is playing a counter clerk in a typical 1970's luncheonette.

Every time a customer comes in, the same senseless routine is followed.

The customer looks at the menu, takes some time to decide what he wants to order, and then orders carefully, item by item, while John Belushi meticulously writes down everything that the customer orders.

When the customer has finished with a lengthy order, Belushi looks over his shoulder and, totally ignoring anything that the customer ordered, yells back at the cook, "cheeseburger, french fries, coke!," or something like that.

Just like there is a menu of choices in the luncheonette that people think that they get to select from, there is a "menu" of factors that are supposed to be considered when equitable distribution is worked out, either informally or by way of a court order after a trial.

And, yes, sometimes it does work that way, usually in the infrequent case of people actually going to trial and a Superior Court judge actually hearing all the evidence and determining the issues in the case.

But in most cases, it doesn't really usually work out that way at all, in my experience here in New Jersey as a New Jersey divorce lawyer for 32 years.

Rather, what usually happens is this.

First, the parties, ask the lawyers what the law is. The lawyers usually explain the equitable distribution statute to the client.

Indeed, the parties are essentially told that if they really want to settle the case quickly and without running up a huge amount of debt and counsel fees, then they should split everything equally.

This normally includes that portion of any retirement accounts that were accrued during the marriage, real estate, stocks, money in the bank, and other forms of property, unless there is a really strong reason why they should not do so.

So, like in the John Belushi skit, after the lawyers spend all that time "taking down" what the various assets are, what each person's contribution toward the acquisition was, and similar such information, the lawyers essentially yell, "Cheeseburger! French fries! Coke!" by recommending to their clients that they split everything 50-50.

Now there certainly are exceptions.

And this "reality" is not at all sanctioned by the Court.

Rather, the Court's position is that the equitable distribution statute should be consulted in all cases, and there is no preferred easy way to use a formula of any type to avoid the need to carefully analyze the facts of a case.

And certainly in cases that go to trial before a judge or an arbitration before an arbitrator, that is precisely what happens.

Additionally, if there is a good faith reason why assets should not be shared equally, that argument always is worth making in settlement discussions.

But at the end of the case, my experience over the past 32 years is that many, many, many cases settle at or close to a 50/50 split of all "marital assets" (ie, assets earned by either party between the date of marriage and the day that one party filed for divorce.)