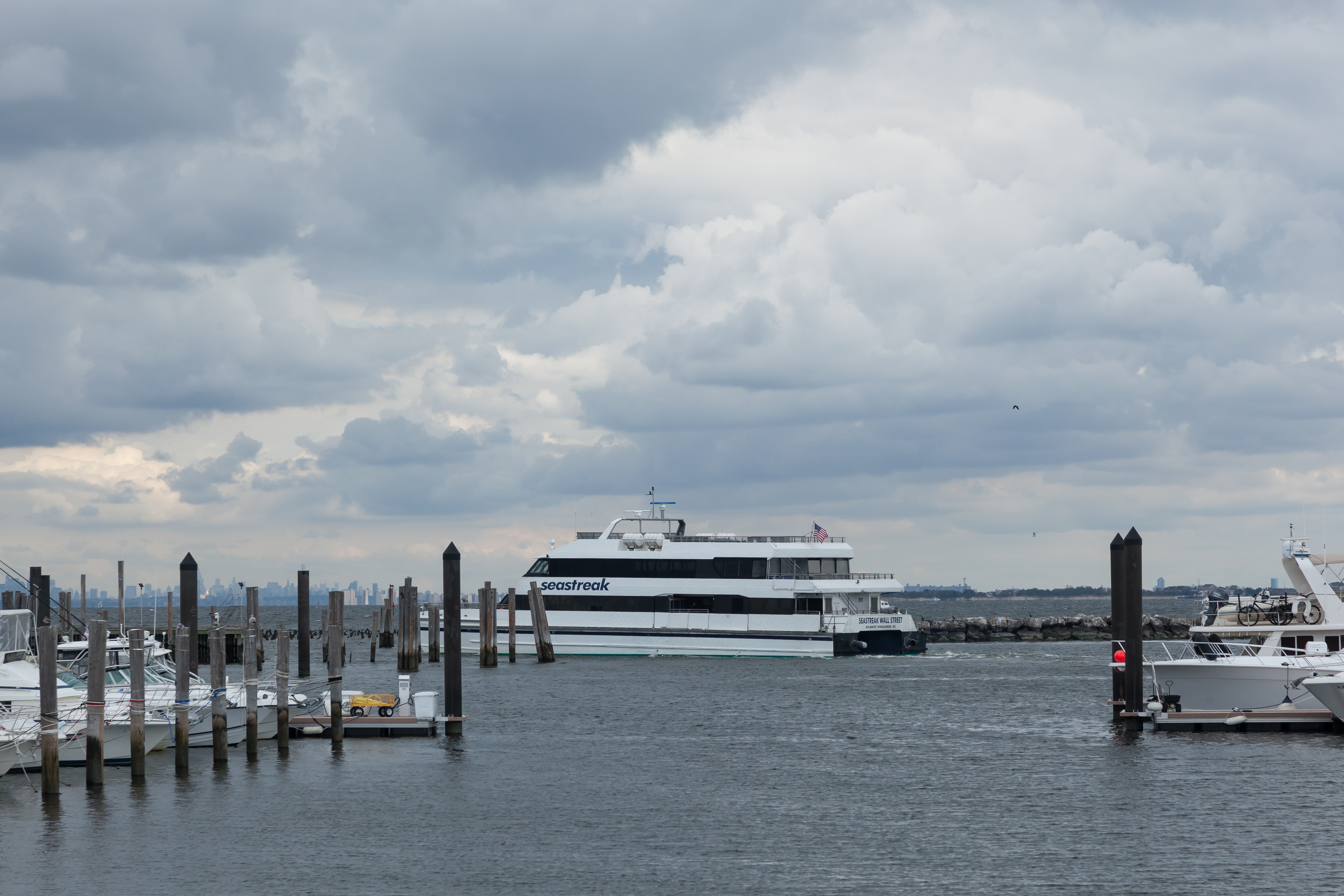 Today, like every other weekday morning for the past 19 years, he left his suburban New Jersey home at 5:15 AM for the commute to his office in New York City.

The financial services firm that he works for has an office nearby in Red Bank that he could work at, but he makes far more money in the city, and living in Monmouth County is expensive.

It's a very long day, but he is proud that it allows him to provide his family with a solid 6-figure income.

They live in Holmdel with their three kids.

His wife stopped working when they had their first child 15 years ago, and has been a homemaker ever since.

Married life is not perfect, but he's happy enough.

But he's not particularly happy about the fact that over the past year, his wife has lost her desire to have relations with him.

“Hormones”, she told him. "And you get home from work so late. I'm lonely."

He trusts his wife. They love each other dearly, he tells himself.

Yet something doesn't feel right.

“She must be bipolar, like her crazy mother," he started thinking to himself recently.

This week he became suspicious enough to put a tracking device on his wife's car "....just to make sure."

It's been on for three days now and nothing unusual has shown up, which made him feel guilty for questioning her faithfulness.

Then at 12:42 PM this afternoon, his life changed forever. The tracking device notified his iPhone that his wife's car was in his best friend's garage.

What the hell is she doing there?

"Hi Honey!" he said into his phone, his heart pounding out of his chest, feeling the drenching sweat rolling down his hand. "What are you doing?"

"Oh, you know, just the same old thing. Got the kids off to school, and now I'm cleaning the house. I can't wait to get out of here, but I've just been too busy today.”

Then a long, uncomfortable silence. They both knew.

He called his best friend. The phone rang 8 times. Then voicemail."What ‘cha doin’, buddy? Give me a call back ASAP."

The call was not returned.

He stormed into the house two hours early.

"I'm outta here!" he blurted out as he moved past his wife to the master bedroom to grab some personal things.

"If you weren't working all the time, you would have noticed how unhappy I've been!" she screamed at him.

"I want a divorce, you devious, cheating bitch!" he yelled back at her.

"YOU want a divorce? I'll give you a divorce that you'll never forget, you obsessive-compulsive workaholic!

YOU caused this. It's not my fault. I'm gonna go for the jugular and take you for everything that you've got," she blurted out.

"Workaholic? I bust my ass to give you everything you've ever asked for, and you do this, with THAT sleazy bum? You won't get a damn nickel from me, and I'll take custody of the kids from you. You are an unfit parent!" he laughed at her.

It's over. He has integrity. He can accept many things, but betrayal is not one of them.

"That bitch isn't getting any of my 401(k), my IRA, my pension, or any of my stocks. She deserves nothing from me. Let that jackass ex-best friend of mine support her."

In addition, he has decided that he's going to speak with a lawyer about applying to the Court for custody. He feels that his wife is unfit, and the kids would rather live with him anyway. He wants a full psychological report done on her "...to prove that she is a bi-polar narcissist."

At times, through his rage, he realizes that he is speaking and acting irrationally, but he is having trouble being calm right now.

The next morning on the ferry to Manhattan, a commuter friend recommended our online "NJ Divorce Course" to him. He looked at some of the articles and he liked what he read.

He also signed up for our "Daily Dose of NJ Divorce" email series which provided him with much additional knowledge and emotional comfort.

Ultimately he hired us to represent him in his divorce case.

We helped him understand the law, and in particular, the way that our divorce court judges in Monmouth, Ocean, & Middlesex counties tend to apply the law to situations like his.

Together, we explored a series of realistic settlement possibilities.

We also recommended several therapists and financial experts to him.

He hired a therapist who helped him deal with his feelings of betrayal, got him to slow down and think about what his goals are, and helped him to focus on what type of custody arrangement is in the best interest of his children.

He also hired a  financial advisor, who helped him get a better grasp on his finances and helped him prepare his Case Information Statement to support his divorce case's financial theory.

He and his wife attended a special custody mediation program at the Court House.

We exchanged multiple settlement proposals with his wife's lawyer, and both parties with their attorneys present participated in mediation of the economic issues.

Ultimately, he settled the case in a way that meets his needs and the needs of his children.

His wife was not able to "take him for all that he's got. Not even close. It was a fair deal.

There was no need for an expensive, drawn-out contested divorce trial. Issues of custody and money were worked out fairly.

Ultimately, he and his wife had a simple uncontested divorce hearing at the Monmouth County Court House in Freehold.

HIS LIFE GOT BACK ON TRACK

He stopped in to say "hello" recently. He looks like a new man.

The rage from the betrayal of his ex-wife and his former best friend that at one time had consumed him is gone.

He told us that his relationship with his children has never been better, and that he was surprised to find that he is not lonely but rather he's enjoying his freedom.

He's able to afford to do what's important to him.

ARE YOU HAVING SERIOUS MARITAL PROBLEMS?

I understand the many stressors that people who are facing the possibility of a divorce often confront.

Every day for the past 32 years I have worked with divorcing people in New Jersey who had concerns like yours. Ultimately, most of them were able to successfully address those issues.

What has helped me assist thousands of New Jersey divorce clients over the years is both that I am highly trained and highly experienced as a divorce specialist, and also that through 32 years of living with my wife and step-children, I have personally experienced many of these same concerns.  (CLICK HERE TO READ "MY STORY")

You're probably anxious to get answers to some important questions.

What's the best way to begin doing that right now?

The answer is to get a good, solid "divorce education."

What is a "divorce education"?

It is specialized knowledge about divorce in New Jersey.

Knowledge that you most likely do not have nearly enough of just yet.

The old saying, "Knowledge Is Power" certainly is true when it comes to divorce.

The more that you learn about how child custody works, how assets are divided, and how alimony and child support are determined, the sooner your anxiety will start to disappear.

To take your focus off of your anger or your fears and instead put it on learning how to successfully handle your divorce, CLICK HERE to begin getting your questions answered RIGHT NOW by beginning to study my "NJ Divorce Course."

This online educational course contains short articles about any divorce-related topic that interests you.

The course contains 85 of my articles organized into 14 online lessons that you can review in any order that you wish.

The knowledge that these easy-to-read articles will give you is the best way that I have discovered for divorcing people to learn how to conquer their divorce-related fears.

If you'd like to meet with me personally, call me at (732) 845-9010 or SEND ME AN EMAIL BY CLICKING HERE. We'll get you in quickly for your "Divorce Strategy Session."

When we meet, we will carefully go over the facts of YOUR case, your particular concerns, and we will discuss the most productive ways to satisfactorily resolve those issues.

I designed this website to offer help to anyone who is willing to take the time to read the articles and learn from them.

Take advantage of this resource...spend some time going through these articles.

I promise that they will help you.

PS: In addition to my NJ Divorce Course, I offer a second way to help you learn what you need to know about divorcing successfully in New Jersey.

If you would like to receive cutting-edge NJ divorce information from me, delivered directly to your email once each day starting right now for the next month, then sign up for my "Daily Dose of Divorce" emails below.

We will not send you Spam but rather only helpful, insightful information about how to best solve important divorce-related topics in New Jersey.

Your first "Daily Dose of Divorce" email will arrive a few minutes after you sign up, and then once every 24 hours, for the next 31 days.

You can unsubscribe at any time...but few people do.

Then you will have both the benefit of my NJ Divorce Course right here, and the added benefit of the "Daily Dose of Divorce" educational emails.

And your divorce-driven anxiety should start to decrease each day as you learn what you need to know to get through this tough time.

Sign Up Here for My "Daily Dose of Divorce" Educational Emails